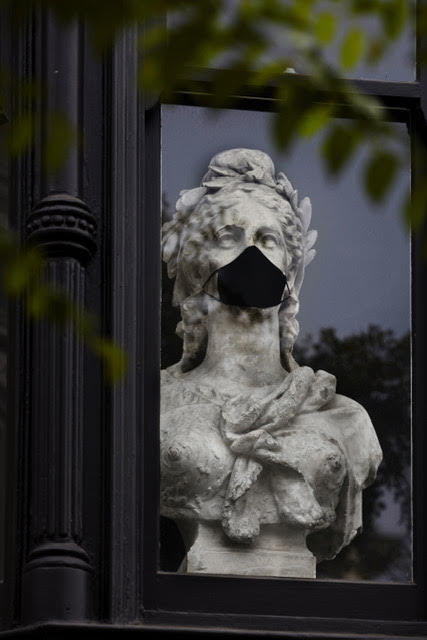 Known as one of the top interior designers in San Francisco and regularly featured in national design publications, Geoffrey De Sousa brings a mix of tradition, cosmopolitan flair and modernism to his projects. De Sousa Hughes, the 30,000 square foot showroom at the San Francisco Design Center that he co-owns with Erik Hughes, is known for its bespoke collection of furnishings, textiles, lighting and accessories by designers and artists across the United States and Europe. De Sousa served as Designers Circle Chair for the San Francisco Fall Show from 2016-2018 and hosted several fabulous parties in honor of the show’s designer patrons.

He’s a busy man, but lately, De Sousa, like the rest of us, has been spending a lot more time at home. We chatted by phone, he from his 1874 San Francisco Victorian, with a black facade. “When I renovated it in 2013 it was just me and little dog,” he said. “Then Jose and I got married, he’s an interiors and architecture photographer and has his office downstairs. The pandemic has informed us as to how we are living here, how we use the space. I had been debating turning the second parlour into a dining room; it makes us think about what’s comfortable.” The double parlour is currently a living room and is where De Sousa gravitates to for work, and a moment of quiet and calm. His morning staff meetings happen there. “Because Jose is a photographer, he has lots of tripods. I set up right there and we have staff meetings every morning with the iPhone on tripods.” Right off the bat, I was thinking, how can we get people into our showroom? I called a friend who is a Realtor who recommended the company Matterport. They did a 3D tour of showroom to put on our website, it’s fantastic.

Diana the Warrior, prepared for the pandemic

The most interesting piece in the living room was bought from former San Francisco antiques dealer, Ed Hardy “a 19th century bust of Diana the warrior 3 ½ ft x 2 feet that sits on a pedestal in the bay window in the living room,” shares De Sousa. “I’ve had it forever. People stop in front of the house constantly to talk about it. It is one of the finest pieces I bought from Ed when I moved to San Francisco. About 2 weeks into the quarantine, I turned it around to face the street and put a black mask on her. It has become very instagrammable.”

For De Sousa, home has to have a sense of history. “It has to be about you, your trips, your family, the things that bring memories, a small piece of glass, an amazing photograph, having those pieces interspaced within your interiors, that juxtaposition and the ability to combine those things in a house gives it soul.” He says. “I have a wall that is 60 photographs dating from the mid the 1800s of my family memories; all different sizes, I have my great, great grandfather and grandmother. I have an amazing photo of my great grandmother at a wedding when she first came to America in 1917. My mother’s side has been in Boston since 1632. Walking by the wall and seeing these people everyday makes my house a home.”

Communication was the biggest change De Sousa encountered from the new virtual workday. “At first everyone went into shock mode and then had to get the projects rolling. How we deliver to clients is different, but people are now used to it, they are adapting pretty well,” he says, “There are people spending a lot of time in their homes and looking at things a little differently. They want the spaces to be usable and comfortable. Each client is so individual. I am really fortunate to have a wide array of clients with very different aesthetics.” De Sousa is seeing a change in attitude and in how clients are using their homes. “I don’t see people asking for home offices right now,” he says, “but I do see people coming to me saying that they are using some rooms more often now than before–using rooms for the first time–using their outdoor spaces more now, not just on the weekends. I also see people who left the city and went to their second homes and they are now really looking at how they use those homes and how they can make them equally usable. People are thinking about nesting, comfort, and entertaining again.”

With no social engagements due to the lockdown, De Sousa anticipated having lots of free time, “I always wanted to learn to needlepoint; I opened the box and never touched it. I bought a Georgian dollhouse for my nieces, but have not started it. Once we started our meetings in the mornings, the day gets away. I’ve taken on three large projects during the pandemic!

In 2015, De Sousa was among the three designers invited to participate in the inaugural return of the Designer Vignettes for the Grand Entry Hall of the Fall Show. Taking on the theme “Time After Time”, De Sousa called his vignette ‘Passagem do Tempo’ (Passage of Time), paying homage to the mid-20th century Brazilian furniture designer Joaquim Tenreiro and his language of organic simplicity. It was surrounded by the sculptural Araucaria forest hand painted on silk by de Gournay. I asked him about a favourite show memory. “Really and truly”, he confessed, “the Preview Gala is one of the ultimate parties of San Francisco every year. When you are all wrapped up in your business and life, to be able to stand with your contemporaries, talk about business, see clients, catch up. You know everyone is going to be there. It kicks off the holiday season. It’s always an upbeat feeling. That will be missed the most in this year.”

But with the isolation, there is an upside: “Jose and I are relative newlyweds so this time we have had and with my dog has been really lovely. We spend a lot of time together, watching a great movie–we watched Hamilton the other night–it’s been great. And we’ve been reaching out to friends on Zoom that I probably would not be talking to so much otherwise.”

By Ariane Maclean Trimuschat
Ariane served as Show Director for the San Francisco Fall Show for 7 years through 2019. She is now the show’s international liaison as Director at Large, living in London with her family.  Follow Ariane on her blog, Sojournest, where she focuses on all things home and travel. 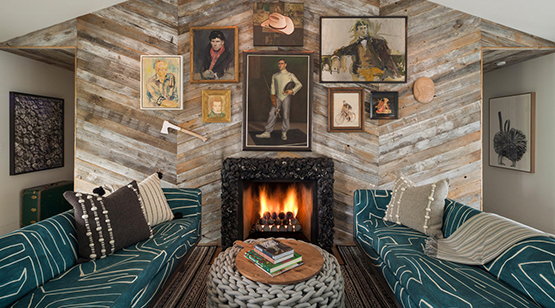 San Francisco designer Jay Jeffers knows a thing or two about beautiful objects. His retail showroom Jay Jeffers-The Store offers a collection of furniture and pieces discovered along his travels. When he agreed to create a vignette for the 2017 Fall Show, the theme that year was Flower Power and the vignettes focused on the Four Seasons. Jeffers’ boldly graphic, deep plum showcase beautifully conveyed the warmth of a cozy winter evening.

I recently chatted with Jay about the many cozy days and nights we are all spending at home during quarantine, and how that has impacted his life, and his appreciation of his own collection of beautiful objects. “One of my favorite pieces is by New York artist Forrest Williams. It has a mysterious haunting quality that I love” says Jeffers.

In designing a house, there are certain things that make it a home. For Jeffers, it is the personal effects that create memories, “whether it is art you have collected, or family photos, books, some kooky object that you bought when traveling in Africa—those things that invoke memories of a time and place. This is what created soul in a home.”

Jeffers is spending quarantine in the Napa home he shares with his husband Michael Purdy. “I have commandeered one of the guest bedrooms as my office. The closet holds my papers and files. There is a small desk, though I admit most of my computer and zoom meetings have taken place on the guest bed with my laptop.”

The best part of spending so much time at home? “Well, my dog, Olive is by my side, basically all day long, which is so nice. We have been cooking, setting the table every night with candles and linen napkins, and just generally slowed down a little bit.” He shares. His favorite room is the living room, “A fire in the fireplace, with the fire going is a good spot for me. I’m an early bird and always the first one up. It is so nice to sit by the fire and have my coffee and slowly wake up.”

When it comes to the San Francisco Fall Show, Jay has discovered many treasures over the years. His favorite find? “A pair of art deco club chairs that were made in India out of rosewood. Their new home are clients of mine that are of Indian descent so these chairs fit perfectly with our design and reminded them of home at the same time.” Jay has been a longtime supporter of the Show “it is so great to see the entire design community out and supporting an amazing cause that I have been involved with for years” he says. “But also for me it’s a chance to see beautiful things from galleries all over the world that I may not have visited. The internet, 1stdibs and all of the other sights are a wonderful tool for sourcing, but nothing compares to seeing the beauty and the condition of a piece in person.”

With no social engagements, travel or commute, Jeffers is appreciating the extra free time, and using it well. “I’m finding more time to deep dive into inspiration—Pinterest, Instagram, etc. There are some crazy talented people out there I am just discovering. In the evenings, I’m taking the dog for a walk or going on an easy bike ride.”

With all that is going on in the world, I think we all get a pass to break a rule or two. What is Jeffers? “Cocktails every night!” Cheers to that!