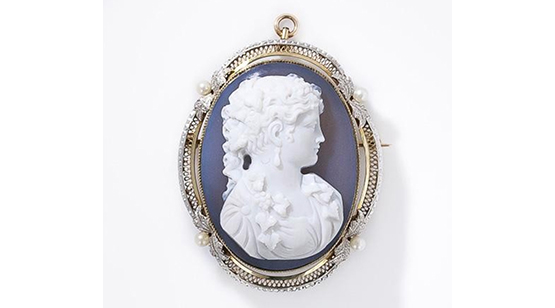 Cabriole refers to a popular furniture leg with the knee curving outward and the ankle curving inward terminating in an ornamental foot. It is commonly associated with Queen Anne and Chippendale styles of antique furniture. When used with Chippendale furniture, the cabriole leg commonly terminates with a ball and claw foot. In Queen Anne examples, the pad foot was popular, but other foot styles were used with these legs as well.

The caquetoire, or conversation chair, was an armchair style which emerged during the European Renaissance. It was largely used in France, and is one of the most well-known pieces of furniture from the French Renaissance. Due to fashions of the time and the lack of heating systems in homes, women wore several layers of skirts and petticoats to keep warm. This often prevented them from fitting comfortably into armchairs with rectangular seats. A caquetoire seat is splayed so women in their large skirts could easily sit.

A cameo is a material that is carved with a raised relief that often depicts a profile of a face or a mythical scene. Cameos are commonly made out of shell, coral, stone (often agate or onyx), lava, or glass. The most common motif of antique cameo jewelry depicts a profile of a face or mythical creature. There are typically two colored layers; generally, figures are carved in one layer so that they are raised on the background of the second layer. England’s Queen Victoria is credited with popularizing shelled cameos in the 19th century.

A cellarette or cellaret is a small furniture cabinet, available in various sizes, shapes, and designs (and sometimes portable) which is used to store bottles of alcoholic beverages, as well as decanters and glasses. Prohibition in the United States brought about variations of trompe l’oeil cellarettes designed to conceal illegal alcoholic beverages. To the casual observer, the three dimensional trompe l’oeil artwork on these cellarettes made them appear to be an ordinary table, bookcase, or other piece of furniture.

Italian for “light-dark,” chiaroscuro is the use of strong contrasts between luminosity and shadow to achieve a sense of volume and dimensionality. This unique technique was developed during the Italian Renaissance by Leonard da Vinci, the Baroque period by Caravaggio, and the Dutch Golden Age by Rembrandt.

Self portrait wearing a white feathered bonnet, by Rembrandt, oil on pane, 1635

In sculpture, contrapposto (“counterpose” in Italian) is an asymmetrical posture in which most of a figure’s weight is distributed onto one foot. This results in a realistic stance, as famously evident in Michelangelo’s David statue (below).

Color Field painting is a style of abstract painting that emerged in New York City during the 1940s and 1950s. It was inspired by European modernism and closely related to abstract expressionism, while many of its notable early proponents were among the pioneering abstract expressionists. Color field is characterized primarily by large fields of flat, solid color spread across or stained into the canvas creating areas of unbroken surface and a flat picture plane. The movement places less emphasis on gesture, brushstrokes and action in favor of an overall consistency of form and process. In color field painting “color is freed from objective context and becomes the subject in itself.” Artists who are considered part of the Color Field style include Mark Rothko, Clyfford Still, Helen Frankenthaler, Barnett Newman, Robert Motherwell and Frank Stella.

Cloisonné is decorative work in which copper filaments are glued or soldered to a metal surface—gold in the Near East, bronze or copper in China—to create tiny compartments, or cloisons, that are then filled with ground glass blended with metallic oxides to produce colorful enamels.

From the French word for “cracking”, craquelure describes a pattern of fine cracks on the surface of a painting or a ceramic object. In an oil painting, craquelure forms because the paint dries and becomes less flexible as it ages and shrinks. It can be used by experts to determine the age of a painting and to detect forgeries.