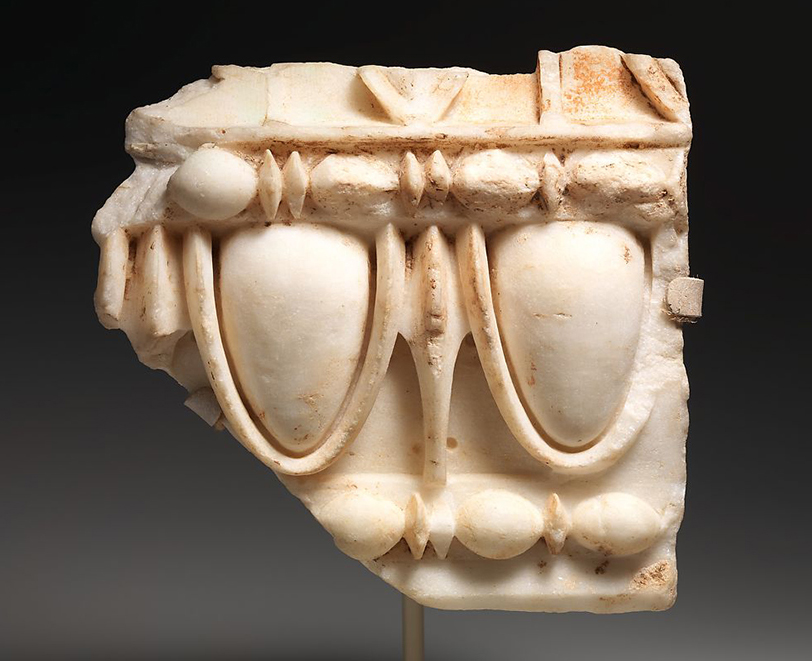 An ébéniste is a French term for a cabinet-maker, particularly one who works in ebony. Ébénistes make case furniture, either veneered or painted.

Egg-and-dart is a repetitive design, most often found on molding or trim. The pattern is characterized by a repetition of oval shapes, like an egg split lengthwise, with various non-curved patterns, like “darts,” repeated between the egg pattern. In three-dimensional sculpting of wood or stone, the pattern is in bas-relief, but the pattern can also be found in two-dimensional painting and stencil. The exquisite architectural fragment belongs to one of the decorative moldings of the Erechtheum, the building on the Athenian Akropolis that accommodated a variety of venerable cults and sanctuaries, circa 421–409 B.C.

The Empire style is an early-nineteenth-century design movement in architecture, furniture, other decorative arts, and the visual arts, representing the second phase of Neoclassicism. The style takes its name from the rule of the Emperor Napoleon I in the First French Empire. The previous fashionable style in France had been the Directoire style, a more austere and minimalist form of Neoclassicism, that replaced the Louis XVI style. The Empire style brought a full return to ostentatious richness.

Vitreous enamel, also called porcelain enamel, is a material made by fusing powdered glass to a substrate by firing, usually between 750 and 850°C (1,380 and 1,560°F). The powder melts, flows, and then hardens to a smooth, durable vitreous coating. The word comes from the Latin vitreum, meaning “glass”. Enamel can be used on metal, glass, ceramics, stone, or any material that will withstand the fusing temperature.

Encaustic painting, also known as hot wax painting, involves using heated beeswax to which colored pigments are added. The liquid or paste is then applied to a surface—usually prepared wood, though canvas and other materials are also used. Metal tools and special brushes can be used to shape the paint before it cools, or heated metal tools can be used to manipulate the wax once it has cooled onto the surface. Today, tools such as heat lamps, heat guns, and other methods of applying heat allow artists to extend the amount of time they have to work with the material. Because wax is used as the pigment binder, encaustics can be sculpted as well as painted. Other materials can be encased or collaged into the surface, or layered, using the encaustic medium to stick them to the surface.

Encoignure is a type of furniture located in a corner of a room. In French, it literally means the angle, or return, formed by the junction of two walls. Since the 20th century, the word has been mainly used to designate a small armoire, commode, cabinet or cupboard made to fit a corner.

An epergne is a table centerpiece, usually made of silver but can also be made of another metal, glass, or porcelain. An epergne generally has a large central “bowl” or basket, resting on three to five feet. From this center “bowl” radiate branches supporting small baskets, dishes, or candleholders.

A decorative plate used to conceal a functioning, non-architectural item – such as a keyhole, door handle, or light switch – for protection and decoration.

Egyptomania was the renewed interest of Europeans in ancient Egypt during the nineteenth century as a result of Napoleon’s Egyptian Campaign (1798–1801) and, in particular, as a result of the extensive scientific study of ancient Egyptian remains and culture inspired by this campaign. The grandeur and “exoticism” of its pyramids, temples, Great Sphinx, and culture have made this great civilization a recurring subject in architecture, film, art, and popular culture. During the 20th century Egyptomania reached a fever pitch in the United States: Howard Carter’s 1922 discovery of King Tutankhamen’s Tomb caused a nationwide craze, and Elizabeth Taylor’s portrayal of Cleopatra in the 1963 classic film inspired a new interest in ancient Egyptian fashion.