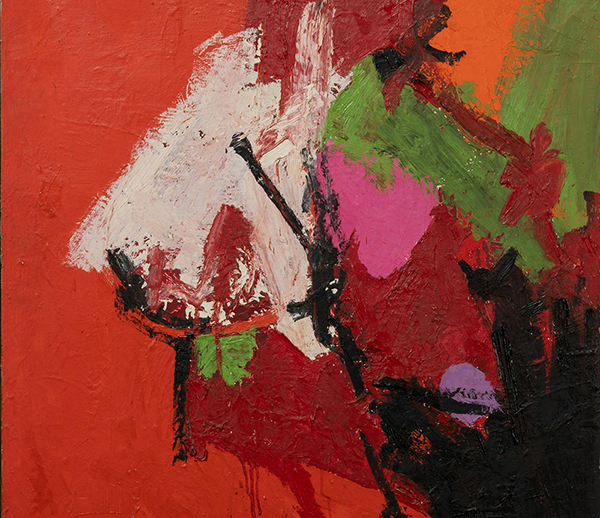 Abstract expressionism refers to new forms of abstract art developed by American painters such as Jackson Pollock, Mark Rothko and Willem de Kooning in the 1940s and 1950s. It is often characterized by gestural brush-strokes or mark-making, and the impression of spontaneity. It was the first specifically American movement to achieve international influence and put New York City at the center of the western art world, a role formerly filled by Paris.

Barnet Newman, another artist associated with the movement, wrote:

“We felt the moral crisis of a world in shambles, a world destroyed by a great depression and a fierce World War, and it was impossible at that time to paint the kind of paintings that we were doing—flowers, reclining nudes, and people playing the cello.”

Aestheticism (or the Aesthetic Movement) is a late 19th-century European movement which centered on the doctrine that art exists for the sake of its beauty alone, and that it does not need to serve a political, didactic, or other purpose – “art for art’s sake”. More than a fine art movement, Aestheticism penetrated all areas of life – from music and literature to interior design and fashion. Key figures include artists Dante Gabriel Rossetti, Edward Burne-Jones and James McNeill Whistler, author Oscar Wilde, poet Algernon Charles Swinburne. Aesthetic style furniture is characterized by several common themes: ebonized wood with gilt highlights, a Far Eastern influence, a prominent use of nature, especially flowers, birds, ginkgo leaves, and peacock feathers.

The acanthus leaf is a popular architectural design element in Ancient Greek architecture. It was first used on capitals, or tops, of Corinthian columns. Its design is a stylized version of a Mediterranean plant with jagged leaves known as Acanthus Spinosus. The Romans continued to use acanthus leaves in decoration, and many cultures followed suite in using this classic decorative motif, including Byzantine, Romanesque, and Gothic traditions. With the neo-classical revival in England in the eighteenth century, the acanthus leaf became a prominent feature in art once again: everyone from Thomas Chippendale to Robert Adam incorporated the acanthus leaf into their furniture designs, often featuring the acanthus leaf on the knees of chairs, friezes of tables, and stems of legs.

The Anthemion (or Palmette) is a motif in decorative art consisting of a number of radiating petals or leaves which resembles the fan-shaped leaves of a palm tree. It is found in most artistic media, but especially as an architectural ornament, whether carved or painted, and painted on ceramics. It is very often a component of the design of a frieze or border.

Art Deco, or simply Deco, is a style of visual arts, architecture and design that first appeared in France just before World War I. Art Deco influenced the design of buildings, furniture, jewelry, fashion, cars, movie theaters, trains, ocean liners, and everyday objects such as radios and vacuum cleaners. It took its name – short for Arts Décoratifs – from the Exposition internationale des arts décoratifs et industriels modernes held in Paris in 1925. It combined modern style with fine craftsmanship and rich materials.

The Arte Povera (literally “poor art”) movement took place between the end of the 1960s and the beginning of the 1970s in major cities throughout Italy and above all in Turin. The word “poor” here refers to the movement’s signature exploration of a wide range of materials beyond the traditional ones of oil on canvas, bronze, or carved marble. Materials used by the artists included soil, rags and twigs. In using such throwaway materials they aimed to challenge and disrupt the values of the commercialized contemporary gallery system. Among the leading Arte Povera artists were Giovanni Anselmo, Alighiero Boetti, Pier Paolo Calzolari, Jannis Kounellis, Mario Merz, Marisa Merz, and Michelangelo Pistoletto.

Created by the Asscher Brothers of Holland’s Asscher Diamond Company (now the Royal Asscher Diamond Company), this diamond cut features large step facets and a high crown that produces a brilliance unlike any other diamond shape. In fact, diamond experts often refer to the shine and sparkle of an Asscher cut diamond as “an endless hallway with reflective mirrors”.

The most famous Asscher-cut diamond of all was worn by the late Hollywood legend Elizabeth Taylor. The story goes that Richard Burton bought the 33.19ct Krupp Diamond for the actress after she beat him at a game of table tennis. The diamond was previously owned – and named after – Vera Krupp, who was part of the Krupp dynasty that supplied arms to the Nazis during the Second World War. Burton bought the diamond for $385,000 in 1968 and Elizabeth later remarked in an interview: “When it came up for auction in the late 1960s, I thought how perfect it would be if a nice Jewish girl like me were to own it.”

Assemblage is an artistic form or medium usually created on a defined substrate that consists of three-dimensional elements projecting out of or from the substrate. Think of it as the three-dimensional version of a collage. In 1961, the exhibition “The Art of Assemblage” was featured at NYC’s MOMA. The exhibition showcased the work of early 20th-century European artists such as Braque, Dubuffet, Marcel Duchamp, Picasso, and Kurt Schwitters alongside Americans Man Ray, Joseph Cornell, Robert Mallary and Robert Rauschenberg.

An athenienne is a small, decorative stand in the form of an antique tripod, used especially in France (often in pairs) in the Louis XVI and Empire periods. The multi-purpose athénienne was intended for entertaining in the salon or boudoir, including pedestal table, perfume burner, heater (for coffee, tea, or chocolate), a planter to grow bulbs in the winter etc.