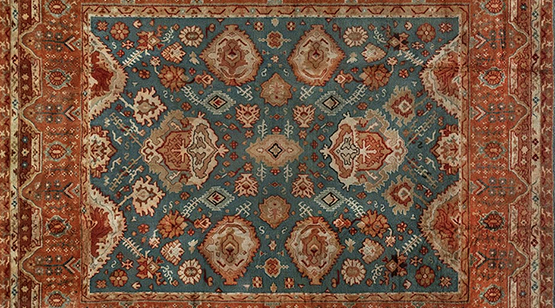 Ukiyo-e is a genre of Japanese art which flourished from the 17th through 19th centuries. Its artists produced woodblock prints and paintings of such subjects as female beauties; kabuki actors and sumo wrestlers; scenes from history and folk tales; travel scenes and landscapes; flora and fauna; and erotica. Ukiyo-e literally means “pictures of the floating world” (the floating world was the name of the entertainment district in Edo–modern Tokyo).

“Fifty-Three Stations of the Tokaido Road: Totsuka (Motomachi Detour),” Hoeido edition, by Utagawa Hiroshige I (circa 1833-34). Image via Yamatane Museum of Art.

Ultramarine is a blue pigment originally made from ground lapis lazuli.

Ceiling of the Scrovegni Chapel in Padue, decorated by Giotto di Bondone and completed in 1305. The blue color is ultramarine.

Uranium glass is glass which has had uranium, added to a glass mix before melting for coloration – from yellow to green (Uranium glass also fluoresces bright green under ultraviolet light). Uranium glass was once made into tableware and household items, but fell out of widespread use when the availability of uranium to most industries was sharply curtailed during the Cold War in the 1940s to 1990s.

Urartu was a powerful kingdom that rivaled the Assyrian Empire in the first millennium B.C. It extended from northeastern Turkey into northwestern Iran. Its settlements were palace-fortresses that protected agricultural production and supported many crafts, especially an extensive metalworking industry. In the late seventh century B.C., Urartian centers were destroyed by an enemy whose identity remains unknown.

The Uraeus is the stylized, upright form of an Egyptian cobra, used as a symbol of sovereignty, royalty, deity and divine authority in ancient Egypt. It was worn on the headdresses of ancient Egyptian deities and sovereigns. In Egyptian mythology, the cobra is associated with the goddess Wadjet.

In Buddhist art and culture, the Urna is a spiral or circular dot placed on the forehead of Buddhist images as an auspicious mark. It symbolizes a third eye, which in turn symbolizes vision into the divine world; a sort of ability to see past our mundane universe of suffering.

An ushabti (also known as shawabti or shabti) is a funerary figurine or statuette found in many ancient Egyptian tombs. Ushabtis are usually made of blue or green glazed Egyptian faience, but can also consist of stone, wood, clay, metal, and glass. An important component of the burial, ushabtis took over the role of the servant models, and acted as substitutes for the deceased himself.

Ushak carpets or Oushak Carpets are Turkish carpets that use a particular family of designs, called by convention after the city of Uşak, Turkey – one of the larger towns in Western Anatolia, which was a major center of rug production from the early days of the Ottoman Empire, into the early 20th century (although these patterns were woven in other regions also).

The Ushnisha, or the crown of hair, is the three dimensional oval at the top of the head of the Buddha. Ushnisha is one of the most unique features of Buddhist art and Buddhist iconography.