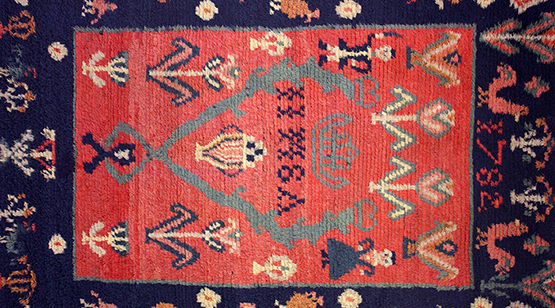 Raku is a type of hand shaped porous Japanese pottery with a thick lead glaze, in colors ranging from dark brown and light red to straw, green and cream. First produced in the 16th century, and closely associated with the tea ceremony. Still used in Japan today.

Raku tea bowl by Ichinyu-Raku IV (possibly), 17th century; in the collection of the Rijksmuseum, Amsterdam.

A rapier is sword consisting of a metal blade, longer than a dagger and fitted with a handle or hilt equipped with a guard. A rapier is designed for thrusting rather than slashing or cutting, and was popular in the 16th and 17th centuries.

From Peter Finer: A silver-encrusted rapier, English, circa 1635.

A regard ring is a ring which has been set with a gemstone acrostic or puzzle. The first letters of the gemstones correspond with the word “regard” – Ruby, Emerald, Garnet, Amethyst, Ruby and Diamond – and are set in that sequence. The antiquated word for garnet, vermeil was used for the letter “v “and “j” as in the gemstone jacinth, was used to stand in for the letter” i “. First introduced by the French jeweler Mellerio in 1809, acrostic rings soon became very popular tokens of loving sentiments. The fad swept Europe and Empress Marie Louise had three acrostic bracelets commissioned to acknowledge the love between Napoleon and herself.

From Lang Antiques: Victorian regard ring.

Even though they sound alike, Régence and Regency refer to two quite different styles. The French Régence years were in the early 18th century when King Louis XV was too young to reign and so Philippe d’Orléans governed in his place as Prince Regent. The fine furniture and decorative arts in this period were in a transitional style – lighter and less formal than the preceding Louis XIV style, the result of shifting tastes between the previous Baroque styling that was popular during the reign of Louis XIV, and the rising Rococo look that would become fashionable during the reign of King Louis XV after he took the throne as an adult. About a century later, across the channel in England, the English Regency era occurred in the early 19th century. During those years George IV served as Prince Regent on behalf of his father George III who wasn’t well enough to govern. But the term English Regency style usually refers to a longer time span than just those 9 years, continuing through to around 1837. Regency furniture retained the neoclassical look of the preceding Georgian era, inspired by ancient Greek, Roman and Egyptian design. Other characteristics include: symmetrical and streamlined designs, dark woods and dramatic decorative veneers often accented by gold and metal accents, and classic decorative motifs including rosettes, laurel wreaths, acanthus leaves and lyres, which are U-shaped harps.

Left: French Régence walnut chair, circa 1715-1730, image via The Cleveland Museum of Art. Right: English Regency mahogany open armchair after a design by Thomas Hope, possibly by Marsh and Tatham, circa 1800, image via Christie’s.

Repoussé is a form of chasing on silver and other metals to provide intricate patterns and to sharpen detail. The technique involves first embossing (pushing out) the general shapes from the reverse of the piece to create a three-dimensional effect on the outer surface. The repoussé (pushed back) element comes in when the finer decorative details are added by selective pushing back of these raised surfaces from the front.

A rocaille is a rococo design ornament in the form of irregular wavy and rocky surfaces resembling seafoam and shell embedded rocks. Often rococo artifacts can be identified by the asymmetrical design of this ornament.

Various Designs for Rocaille Ornaments, by artist and engraver Jeremias Wachsmuth (German, 1712–1771). Image via The Metropolitan Museum of Art.

A rouleau vase is a Chinese porcelain vase shape with straight cylindrical shape and a straight narrow neck raising from an angular shoulder.

Ryijy is a woven Finnish long-tufted tapestry or knotted-pile carpet hanging. The name ryijy originated with the Scandinavian word rya, which means “thick cloth”. The decorative ryijy rug is an art form unique to Finland.

A rhyton is a roughly conical container from which liquids were intended to be drunk or poured out as an offering to the gods. They are typically formed in the shape of an animal’s head, and were produced over large areas of ancient Eurasia, especially from Persia to the Balkans.

Rhyton shaped as a gazelles head, from Hamadan, Iran, 5th century BC. Image via the National Museum of Iran in Tehran.