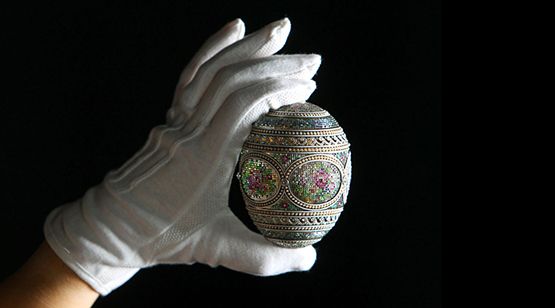 Objets de vertu (roughly translated as “precious objects”) are tiny decorative pieces noted for their fineness of material and craft, often reflecting considerable effort and finesse on the part of the maker. While such objects date from antiquity and appear in various world cultures, they are mostly associated with European customs of religious devotion and later, the consumption habits of aristocrats and nobles. The former category includes crucifixes, religious figurines, rosaries, and reliquaries, while the latter includes brooches, cameos, snuff boxes, statuettes, and watch pieces. Perhaps the most prized examples today are the series of easter eggs made by the Russian House of Fabergé for Tsars Alexander III and Nicholas II in the late 19th and early 20th centuries.

Mosaic egg made by Russian jeweller and goldsmith Peter Carl Faberge, originally commissioned by Tsar Nicholas II in 1914 and acquired by Queen Mary in 1933. Photo by Dominic Lipinski/PA Images via Getty Images.

An ogee is a double curve shape – two curves, going from convex to concave, or vice-versa – often seen in Gothic and Gothic revival architecture, but the term can also refer to the double curve shape in decorative arts such as furniture and textile design.

Okimono are small Japanese sculptured figures usually made of ivory but also of bone or wood. They were made as decorative ornaments for the home during the Meiji (1816-1912) and Taisho (1912-26) periods, and exported to Europe and the USA.

Ornament of Fish in Waves (Okimono) from the Khalili Collection of Japanese Meiji Art. Japan circa 1900.

Onslow is a distinctive pattern of flatware, sometimes called “Scroll”: narrow stemmed, widening at the end, which was ribbed and folded over downwards into a widening volute or scroll. The pattern was used mostly on the handles of mid 18th century serving spoons and ladles. It was named after Sir Arthur Onslow (1691 -1768), six times Speaker of the House of Commons.

Opus Sectile is a mosaic style where slabs of stone are shaped and fitted together as a jigsaw puzzle. It was popular in early Roman times and revived during the Renaissance in Florence, where it became known as pietra dura.

Tigress attacking a calf, marble opus sectile (325–350 AD) from the Basilica of Junius Bassus on the Esquiline Hill, Rome.

Ormolu (from the French term “or moulu” which means finely minced or pounded gold) is the gilding technique of applying finely ground, high-carat gold–mercury amalgam to a bronze object. The mercury is driven off in a kiln leaving behind a gold coating. The French refer to this technique as “bronze doré” and in English, it is known as “gilt bronze”. Around 1830, legislation in France had outlawed the use of mercury for health reasons, though use continued to the 1900s. Craftsmen principally used ormolu for the decorative mountings of furniture, clocks, lighting, and porcelain.

From Butchoff: Pair of Cleopatra candle vases by Matthew Boulton (1728 – 1809), constructed from Derbyshire Blue-John fluospar and very fine cast and chased ormolu, circa 1770.

An orrery is a mechanical model of the solar system that illustrates or predicts the relative positions and motions of the planets and moons.

A German orrery by Ernst Schotte, circa 1892. Image via Christie’s.

The ouroboros or uroboros is an ancient symbol depicting a serpent or dragon biting its own tail. The ouroboros represents the concept of eternity and endless return.

American term for the undulating front of a chest-of-drawers or other pieces of case furniture with a concave front flanked by two convex curves – the opposite of a serpentine front.