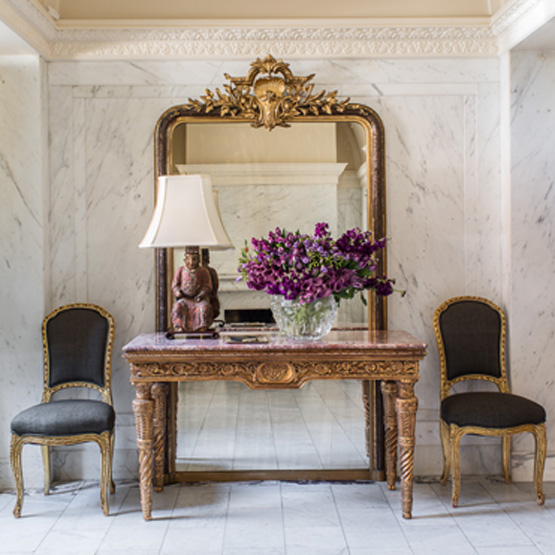 Having lived in ten cities on four continents, Antonio Martins’ design aesthetic is shaped by a unique world view influenced by the colors, textures and moods found in his birthplace of Lisbon, childhood home in Rio, studies in Switzerland, Frankfurt and Venice, hotel career in Hong Kong, Bangkok, Germany and Chicago and finally, graduate school and the founding, in 2004, of his eponymous interior design firm in San Francisco, Antonio Martins Interior Design.

Martins’ ability to mix contemporary pieces with antiques have made his eclectic designs stand out; his rooms for the San Francisco Decorator Showcase have been widely praised and his work has been featured in national design publications.

His take on the ‘Animalia’ theme for the San Francisco Fall Show Designer Vignettes, ‘Meu Brasil Brasileiro’ was a brilliant and colorful homage to his home country. With a vibrant wallpaper backdrop designed by Martins and custom made by de Gournay, featuring today’s Amazon forest, the scene was created to bring awareness to the endangered species of Brazil. Martins has fond memories of the Fall Show “of course you want to see everything because it’s such a learning experience, a lesson in styles,” he shares. I try to go at least three times: opening night, a second time for browsing, and the third time to purchase. My top three dealers are Carlton Hobbs, Il Segno del Tempo and Galen Lowe—he has such incredible objects and displays them so beautifully. And of course I love the lectures!” he exclaimed.

The Future of Design

I chatted with Martins about what he has taken away from the last year and where he sees the design industry post-pandemic. “ Professionally I have had to rely so much on technology and figure it out. The people who were able to embrace tech were able to move forward. There is an auction house in Lisbon, the Palacio do Correio Velho -the owner’s grandchild took over and revamped the technology and it became the most active, best auction house in Lisbon with regular online auctions. Another house did not embrace tech and is not doing so well-they have only had 1-2 online auctions in 10 months,” he explained.

Martins has come to realize how much can be done remotely, “with interior design it’s the same,” he says, “we’ve had to do Zoom, meetings, visit websites instead of the design center, and sometimes it’s even an improvement: meetings on Zoom with our lighting designer work better than ever; we all have our own screen looking at the same thing at the same time. It is much better than everyone crowding around one small screen in a conference room.” He admits not being a millennial has its drawbacks—”the new generation does things in a different way- they are more tech savvy, they grew up with it,” he mused.

“Pacific Heights Residence” with custom designed sofa and armchairs Fabricated by J. Lars upholstery, Cathare Coffee table by Christian Liaigre.  Wing Chair at the back by Jean de Merry.   Antique English portrait of a Gentleman, circa 1634 above fireplace.
Photograph by Drew Kelly

The design industry has had to adapt in 2020, but for Martins, the changes were more personal. “We have a craft and an art that is so incredible, but the main realization this year is that we are not saving lives. It puts things in perspective,” he said. “The economy of design is looking after our employees, our vendors. I think this pandemic has hopefully helped us to be better people, paying people when they can’t work, holding off on furloughs. I realized in some cases it makes no difference for certain employees to work from home. It’s given me time to look at each employee and decide what works best-work from a home/office perspective, people become more productive when they have time,” he explained.

A Shift in Focus

Now that the world has been spending most of their time at home, Martins is seeing a subtle shift in how people are seeing their homes and what their focus is. “We have a tendency to do big open spaces-people want this,” he explains. “There was always this idea that on the kitchen counter or in the family room there was a computer, and maybe there was a home office for a parent. But when everyone was all of a sudden at home all the time, they were all in the same room; people felt the need to have individual space.”

“If I see a trend, it’s the idea that one big space is not enough; people need their personal space. In time with the idea of big open spaces I suspect we will also see partitions, or ways to separate; more of a tendency to create individual spaces. At the same time, looking at function, not just the beauty of it, but function over form: creating spaces that are comfortable and user friendly, with places for wires and technology and better chairs for doing work.”

When designing, Martins does prioritize certain spaces in the home that require more thought. “The public spaces, where you entertain guests, you want to have a certain look, and the technical spaces-bathrooms and kitchens – showers, drains, tubs, these are much more technical and require more attention,” he says.

But it all depends on the client. “My goal is always to find my client’s style– the only place where I want my style is my own home. What colors do they like, what patterns, within any style they want, we work with that. There is the type of client who knows exactly what they want and others who like everything and we guide them. Many times we try to schedule a second meeting and analyze what they want, show them different options mixing two styles together. Communication is crucial to understanding a client’s desires. I always use reference images to appreciate who they are and what they want and then we talk about what level of engagement they want to have. Do they want to be very involved? If a client has great style, I love the collaboration.”

Living room at “Sonoma’s weekend retreat”. Guests are welcome by a sketch by Rico Le Brun, a notorious Muralist of the 20s purchased at Bonhams Auction. The sepia tone sketch is highlighted by two large pillows made of  Samarkand suzani pieces.
Photograph by Drew Kelly

Inspiration comes from many places for Martins, most of all from travel. But, with most travel halted for the past year, he has turned to armchair traveling: “movies, TV, books and magazines,” he says. “AD, Elle Décor, Vogue, House Beautiful, Interior Design, and YouTube is amazing for watching small documentaries about art, design, and architecture.”

Ultimately, Martins says there is one element in a home that is the most important “mood” he says, “and mood is all about the lighting. I love really low lights and lots of spots. I use very little overhead lighting. Dimmers are the most important thing you can have in your home. You can have a room with one statue on a pedestal, and if it is well lit, it would make the room.”

By Ariane Maclean Trimuschat
Ariane served as Show Director for the San Francisco Fall Show for 7 years through 2019. She is now the show’s international liaison as Director at Large, living in London with her family. Follow Ariane on her blog, Sojournest, where she focuses on all things home and travel and on Instagram @ariantrim