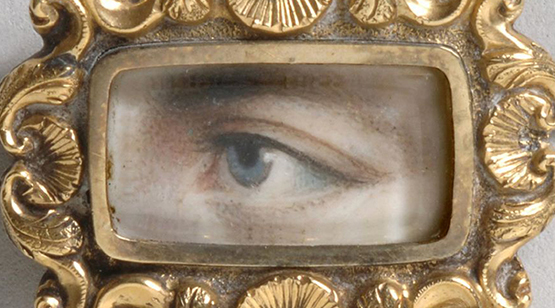 Lacca Contrafatta (also termed Lacca Povera) was developed to imitate the appearance of costly, scarce, and fashionable high value lacquer being imported into Europe from the far East. This popular form of decoration sprang up in Venice circa 1750 and used prints, cut and pasted on to armoires, cabinets and chests, then painted, gilded and finished with clear varnish. Interestingly, Lacca Contrafatta is now rarer and possibly more valued in the west than the material it imitated.

Latticino is a term used to describe glass decorated with a pattern of white, or sometimes colored, threads of glass. The technique is also known as Filigrana (thread-grained). It was developed in 16th century Venice and has been used to produce three main effects on glass: vetro a retorti, which has twists embedded in clear glass; vetro a reticello, which has a fine network of crossed threads; and vetro a fili, which has a spiral or helix pattern.

19th century Venetian goblet, in latticino vetro a reticello. Image via the V&A.

Lava glass is a dark blue lustre art glass developed by the US designer Louis Comfort Tiffany in the late 19th century. It has iridescent gold streaks – supposed to resemble flows of lava – and was originally called volcanic glass.

Lava glass vase by the Tiffany Studios, circa 1914. Image via The Charles Hosmer Morse Museum of American Art.

A lavallière is a necklace comprised of small links with a single, usually pearl, drop pendant. It is named after Louise Françoise de La Baume Le Blanc, Duchesse de La Vallière (1644-1710), mistress of Louis XIV and the design was very popular around 1900.

A lenticle is the glass panel in a clock case through which one can see the movement of the pendulum.

Linenfold (or linen fold) is a simple style of relief carving used to decorate wood panelling with a design imitating folded linen. Linen fold furniture is furniture that has panels of decoration in the form of folded linen. Originally from Flanders, the style became widespread across Northern Europe in the 14th to 16th centuries.

French for “boat-shaped bed”, a lit-en-bateau is an Empire-style bed with curving head and footboards, often forming S-shaped scrolls.

A late Empire ormolu-mounted mahogany lit-en-bateau, in the manner of Jacob Desmalter, circa 1815. Image via Christie’s.

A “lover’s eye” miniature is a painted miniature of the giver’s eye, presented to a loved one. The notion accompanying this very short-lived fad (circa1790 through 1820) was that the eye would be recognizable only to the recipient and could, therefore, be worn publicly keeping the lover’s identity a secret. Painted in watercolor on ivory or gouache on card, the miniatures were set in rings, pendants, brooches, and lockets for women and various containers such as snuff boxes and toothpick cases for men.