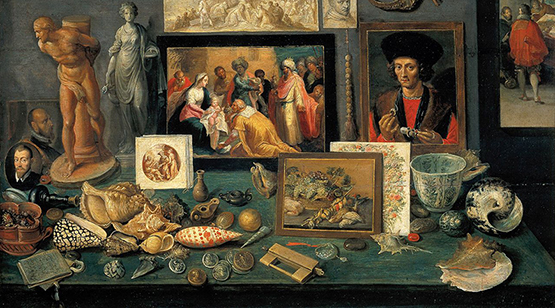 A Kalaga is a heavily embroidered appliqué tapestry made of silk, flannel, felt, wool and lace against a background made of cotton or velvet. Kalagas were originally developed in Burma (now Myanmar) at the Mandalay court (1850-1885) to serve as wall hangings, curtains, room partitions, coffin covers and theatre backdrops. These traditional Burmese tapestries depicted scenes from various legends as well as events of religious importance.

A type of ancient Greek cup with a tall foot and two high-swung handles, used to hold wine, possibly for drinking or for ritual use and offerings. Although almost all surviving examples are in pottery, the form probably originated in metalwork.

Kantharos with Zeus Pursuing a Boy. Circa 490-480 BCE. Museum of Fine Arts, Boston.

Kente cloth refers to a Ghanaian textile, made of handwoven cloth strips of silk and cotton. Historically the fabric was worn in a toga-like fashion by royalty among ethnic groups including the Ashanti, the Akyem, and the Fante. In modern Ghana, the wearing of Kente cloth has become widespread to commemorate special occasions, with highly sought after Kente brands led by master weavers.

Kinetic art is art that incorporates movement as part of its expression – either mechanically, by hand, or by natural forces. A good example of kinetic art are the mobiles by Alexander Calder. Kinetic art became a major phenomenon of the late 1950s and the 1960s. In the 1960s artists such as Bridget Riley and Victor Vasarely experimented with geometric shapes that distort the viewer’s perception, creating artworks which, although static, give the impression of movement.

Kingwood is a classic furniture wood, almost exclusively used for inlays on very fine furniture and small solid items. It was the most expensive wood in general use for furniture making in the seventeenth century, at which time it was known as princes wood. It is available only in small sizes (it is yielded by a smallish tree, Dalbergia Cearensis, restricted to a small area in Brazil). Kingwood is also called violet wood because of the brownish/purple color of its markings, It was given its name because it was preferred by the kings of France in the 18th century.

A French ormolu-mounted kingwood and mahogany bureau plat by Frédéric Schmit, Paris, circa 1860. Image via Christie’s.

A klismos chair is a type of ancient Greek chair, with curved backrest and tapering, outcurved legs. This timeless design was first introduced into Western society way back in the 5th century BCE. Variations of the klismos chair can be found in basically every neoclassical-inspired movement, but it’s most prominent in the French Directoire and Empire, the English Regency, and the American Federal and Empire styles.

The most famous example of the ancient klismos chair may be the Stele of Hegeso, a tombstone made in Athens around 400 BCE, showing a woman named Hegeso seated in a curved, graceful klismos chair.

A kneehole desk, which dates back to the early 18th century, has sets of drawers on either side of the recessed or “kneehole” area that provides room for the legs when a chair is pulled up to the desk.

The kovsh is a traditional drinking vessel or ladle from Russia. It was oval-shaped like a boat with a single handle and could also be shaped like a water bird or a Norse longship. Originally the kovsh made from wood and used to serve and drink mead, with specimens excavated from as early as the tenth century. Metal kovsh began to appear around the 14th century. By the 17th century, the kovsh was often an ornament rather than a practical vessel, and in the 19th century it was elaborately cast in precious metals for presentation as an official gift of the tsarist government.

A kovsh by Vasilli Matveev Kunkin from 1758; in the collection of the Walters Art Museum.

Cabinets of curiosities (also known in German loanwords as Kunstkabinett, Kunstkammer or Wunderkammer; also Cabinets of Wonder, and wonder-rooms) were collections of notable objects – from the worlds of natural history, geology, ethnography, archaeology, religious or historical relics, works of art and antiquities. The term cabinet originally described a room rather than a piece of furniture. The classic cabinet of curiosities emerged in the sixteenth century. In addition to the most famous and best documented cabinets of rulers and aristocrats, members of the merchant class and early practitioners of science in Europe formed collections that were precursors to museums. Cabinets of curiosities served not only as collections to reflect the particular curiosities of their curators but as social devices to establish and uphold rank in society.