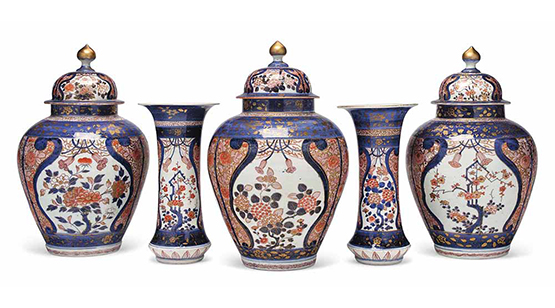 Ice glass refers to a decorative effect that causes the surface of the glass to resemble cracked ice, with a frosted appearance. It is made by rolling partly blown molten glass over powdered glass, then reheating it and blowing into shape. It can also be created by plunging white-hot molten glass into cold water to produce veined tiny cracks. Ice glass is also called crackle glass, frosted glass, or verre craquelé.

Imari refers to heavily decorated Japanese porcelain with overglaze enamels and gilding which was exported to Europe in large quantities, especially between the second half of the 17th century and the first half of the 18th century. Typically Imari ware is decorated in underglaze blue, with red, gold, black for outlines, and sometimes other colors, added in overglaze. In the most characteristic floral designs most of the surface is colored, with “a tendency to over-decoration that leads to fussiness”. The style was so successful that Chinese and European producers began to copy it.

Imbrication is a type of decoration or pattern with overlapping edges, such as overlapping scales or tiles.

Intaglio is a technique which dates back to antiquity and is still in use at present. Patterns, designs or images are carved or engraved in gemstones leaving a hollow impression in the untouched background. This style of carving is the opposite of the cameo technique. By the nineteenth-century, intaglios were not considered optimal for jewelry; Victorians preferred cameos. Intaglios were relegated almost entirely to fobs and seals. In 1840 the postage stamp virtually eliminated the need for wax seals and the art of the intaglio began to wane.

An Italian term for elaborately detailed pictorial marquetry or inlaid decoration used on furniture in Renaissance Italy and also sixteenth-century Germany. panelling and furniture. Various woods, tortoiseshell, metals and ivory were chosen for color and texture to create a realistic architectural perspective, or a symmetrical still-life group of objects such as musical or precision instruments. The Metropolitan Museum of Art has on display a complete studio from the Palazzo ducale di Gubbio (below). Designed by Sienese artist Francesco di Giorgio Martini, an intarsia technique was used to create images of latticework cabinets and drawers on the room panels.

During the 18th century, very few Irish families were wealthy enough to afford luxurious furnishings. With middle-class demand virtually non-existent, almost all Irish furniture was of exceptional quality and crafted exclusively for the tiny aristocratic population. Though talented 18th-century Irish craftsmen produced only a relatively few pieces, their work is considered among the finest ever. Today, Irish furniture is highly sought after by collectors, though few pieces are found on the market.

Created to imitate porcelain, Ironstone china was first made in England in 1813 by Charles James Mason of Staffordshire and was known as “Mason’s Ironstone.” Ironstone china is very hard, opaque and pale-bodied. There is no iron in ironstone; its name is derived from its notable strength and durability.

From Earle D. Vandekar of Knightsbridge: Mason or Ashworth hexagonal ironstone vases and covers, circa 1840

Istoriato (literally translated as “with a story in it”) is a style of pottery decoration, originating about 1500 in Faenza, Italy, and popular throughout the 16th century, in which paintings comparable in seriousness to Italian Renaissance easel paintings were applied to maiolica ware. The subjects—biblical, historical, and mythological scenes—are executed with a realism (including the use of perspective) quite unlike any previous pottery decoration.

Ivrene is ivory-colored, slightly iridescent art glass developed by glassmaker and glass designer Frederick Carder during the 1920s. The color was created by adding the minerals feldspar and cryolite to molten glass, and the iridescence was achieved by spraying the finished object with tin chloride and then reheating it.

Iznik pottery, or Iznik ware, named after the town of İznik in western Anatolia where it was made, is a decorated ceramic that was produced from the last quarter of the 15th century until the end of the 17th century. This Turkish earthenware was decorated with bright, high-temperature colors under a glassy quartz glaze. Bright blue, green, turquoise and an impasto red were typical, and blue and white Chinese-inspired wares were also made.