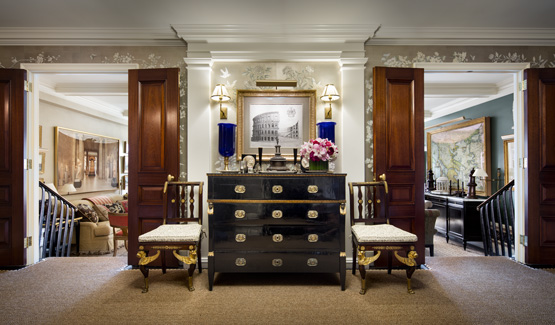 Alexa Hampton’s down to earth, relaxed disposition belies her impressive resumé. As owner and president of her father, Mark Hampton’s celebrated design firm for over twenty years, she has advanced its legacy and expanded the firm, winning industry awards, honorary degrees and repeated inclusion on the AD100, Elle Décor A-List and House Beautiful’s Top Designer lists. The author of two books on design, The Language of Interior Design (Clarkson Potter, 2010) and Decorating in Detail (Potter Style, 2013), Hampton is a force in the interior design industry.

Hampton was honored by the Institute of Classical Architecture & Art (ICAA NoCal) at the 2016 San Francisco Fall Show, and spoke in the Lecture Series that year, and my first impression of her was her hilarious sense of humor and her authenticity.

Hampton Escapes to the Hamptons

I spoke with Hampton by phone months into isolation due to the pandemic. “I have been squatting at my mother’s house in the Hamptons,” she told me. As the pandemic started last spring, “my husband came home (to New York City) from Greece, and I was in San Francisco. He got a call a week later from the Greek Ministry of Health that there were 50 confirmed cases on his flight. I had to call my children’s schools and they shut down. We were caught off guard and decamped for South Hampton”

But being with family ended up being the silver lining of 2020. “I travel so much in my normal life,” she admits, “I had 20 flights in January! In my whole adult life, I’ve never spent this much time in one place.” Hampton has taken the time and opportunity to spend time with her family and re-decorate her mother’s pool house.

She worked there for most of the lockdown, and turned to tech. “I have done intricate FaceTimes,” she said. “I had images on my iPad Pro, and on my iPhone I was FaceTiming and then a pad next to me so I could show what I was drawing. If I wanted a perfect scenario, I would have a tiny video camera pointing at my hand. There are ways to do it,” she said.

Nothing compares to being on site with a client, though, as Hampton sees past the room she is in when visualizing a space. “If you are always looking at a floorplan you tend to look at it room by room and that leads you to forget hallways; sometimes you don’t get the global view. I’ll be sitting at my desk looking at the one room on a floorplan, it’s different than standing in that space that’s essential to how things connect and must be addressed,” she explained. “I look at so many floorplans, and I see the flow from one room to the next. There can’t be a completely jarring transition.”

Hampton has two favourite rooms, the first at her mother’s house, “the beautiful living room my father did when I was 13. It’s one of those rooms that has aged really well,” she shared. “He designed it in 1984! There is lots of seating, lots of light. That’s where we all live.”

In her Manhattan home it’s her bedroom. “I am a very recumbent person,” she admitted. “I work in bed, and I do very good work in the shower; people have good ideas in water. I began this bedroom in white and grey. It was too cool, not sexy, no vim or vigor. It didn’t bring it. We ended with a very rich custom color, we busted through apartments, and put a TV behind the painting on an easel, (you have to have a Samsung screen for that to work),” she advised. The result is an inviting, warm space.

Choosing a favorite piece in her home was easy. “In my entry hall I have a beautiful Neo-Egyptian cabinet. It’s a dramatic opening statement – everything in my entry hall is from an antiques shop. Because a lot of rooms shoot off from the entry, it has to be the center of the wheel.” She said.

But when it comes to making a house a home, books and art are a must. “Art makes my heart sing” she said, and added: “I like checking my kids book spines to see where they have read up to.” Hampton has no qualms about living amongst beautiful antiques in a house with children. “We have had accidents, “she admitted. “I once found my daughter grasping an alabaster carving of the Leaning Tower of Pisa and all the arches were broken off, she was a tiny baby. I suppose it’s how I was brought up. I want for myself to live in the way I live and for them to have that experience. I want them to have had this experience at this time with me. I don’t have rooms where they are not allowed.”

As a collector of art and antiques, the San Francisco Fall Show holds a special place for Hampton. “It’s a beautiful show, it feels very mystical,” she shared. “The great antiques shows are very ambitious; the buying is as important as the seeing. (Art dealer) Charles Plante has everything, if I won the lottery, I would clean him out. It’s a farmers’ market for amazingness.”

Hampton also shops for antiques online. “I always call and ask for non-beauty shots, and ask them to show the piece in proximity to something else,” she said. “If it’s domestic, they allow me to take it on approval. I always confirm the measurements as sometimes there’s a typo. If it is an antiques store, I ask them to take a picture of where it is right now in their shop-you can see it differently that way. Rugs are impossible to tell from a photo; for rugs you have to go in person. I always go first to the people who I admire and know,” she advised.

Hampton believes the pandemic has changed people’s design sensibilities and the way they live. “A lot of people who fled the city and went to vacation areas find they love it are not coming back,” she predicts. “I assume in the next 6-8 months there is going to be a huge decorating boom. A lot of people left London, left New York, and now they are worried about selling houses, their kids finishing school, what will the year look like. Once January/February rolls around they might have a better sense of financial wellness, and that program will begin anew. They will need to create areas where kids can learn and we (adults) can work; space and quiet and storage.

I think we will see urban design in country houses, things will sneak in. There will be an interesting birth of a new design style: “Adaptive Urban Country”. The consignment world is going to blow up, which will make room for a huge wave of antiques buying. There is a great Welsh word that means nostalgia for a place or time you have never been. ‘Hiraeth’ – it’s an earnest longing or desire or sense of regret. I’m a New York City girl. I spent my life looking at Neo-Classical houses, I am ambitious for that.

With most social engagements and travel cancelled this year, Hampton is doing just fine, “I’m a homebody,” she admits, but she seems to keep busy enough working from home. In addition to running her design firm, she has several projects in the works. “I’ve been working on a bedding collection with Eastern Accents, 13 new bed programs and each bed has a European square of one fabric, I already have 5 on my website. We’ve been able to work quickly. I also have some new pieces in collaboration with Theodore Alexander furniture.”

But for Hampton, the hardest thing right now is not knowing what’s going to happen next. “I’m not used to having to be this nimble,” she admits. I am just trying to keep my kids under my thumb. My husband is a good cook. In times of trouble you find out what kind of person someone is–he’s amazing. She works hard but doesn’t find the need to break rules, “I’m pretty self-indulgent,” she admits, “so I don’t really have rules to break.”

By Ariane Maclean Trimuschat
Ariane Trimuschat served as Show Director for the San Francisco Fall Show for 7 years through 2019. She is now the show’s international liaison as Director at Large, living in London with her family.  Follow Ariane on her blog, Sojournest, where she focuses on all things home and travel.