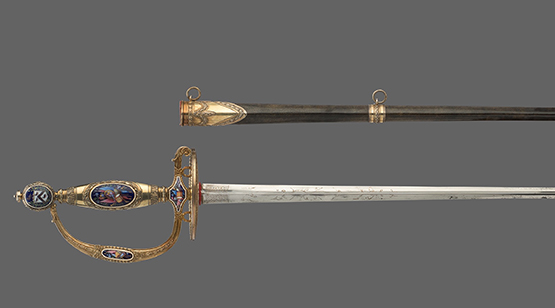 A Hadley chest is a rectangular dowry chest, painted and elaborately carved with flat flowers (often tulips) and leaves, made around Hadley, Massachusetts from about 1680 to 1740 and used for storing clothes and linens.

A Harlequin set is a set of objects such as cups and saucers of a common style, but each piece is decorated differently. The term is also applied to originally unrelated objects – of furniture, for example – which have been ‘matched up’ to make a set.

George Hepplewhite, author of the posthumously published The Cabinet-Maker and Upholsterer’s Guide (1788), stated his goal as “to unite elegance and utility.” Hepplewhite style is conservative, retaining design elements from earlier periods such as the cabriole leg, but tended to have a lighter appearance than the Adam style, its contemporary.

From Clinton Howell Antiques: A fine Hepplewhite carved and gilt settee with six matching armchairs in the French taste. English, Circa 1775.

A common floral motif used on Oriental carpets, and said to originate in the region of Herat, Iran. Typically it consists of a stylized floral rosette arranged in two-way or four-way symmetry, enclosed within a diamond shape.

The hilt is the hand grip of a sword or dagger. Until the 15th century, swords usually had a straight hilt with a cross guard and pommel (a pommel is the rounded knob on the end of the handle of a sword or dagger). Later hilts are more elaborate, in terms of both protection and decoration.

From Peter Finer: The hilt of this late 18th century sword is cast and chased silver-gilt. It is decorated overall with neoclassical iconography, incorporating acanthus leaves, wreaths and sprays of laurel and oak.

Hirado ware is sparsely painted blue and white porcelain made at the Mikawachi kilns for the lords of Hirado, an island near Arita, Japan. Most pieces are likely to be 19th century, although production may have been as early as the late 17th century.

Hollowware is a general term for metal or ceramics ware that is hollow or concave, such as bowls and drinking vessels, platters, coffee and tea pots … – as opposed to flatware.

Silver hollowware at the S.J. Shrubsole booth at the 2019 San Francisco Fall Show.

Horror vacui (from Latin: “fear of empty space”) refers to a tendency to completely decorate the surface of jewels or other objects. Horror vacui is the opposite of minimalism.

A hydria is an ancient Greek water jar made of pottery or metal. It usually has two horizontal handles used when lifting and sometimes a third, vertical handle used when pouring.

Hydria depicting three of the fifty daughters of King Danaos (the Danaids) filling water pitchers, circa 340 – 320 BC. Image via The British Museum.