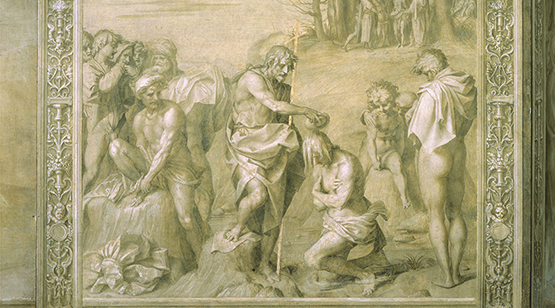 Gadrooning was a popular edging or border design used primarily on metalwork such as silverware, silver service, jewelry and woodwork circa mid-eighteenth to the nineteenth century. The pattern is composed of a series of convex curves, terminating in a curved end or bead shape.

From Carlton Hobbs: a large late Regency mahogany wine cooler in the form of a classical vase, with heavily gadrooned body. English, circa 1815.

Most twentieth-century black-and-white photographs are gelatin silver prints, in which the image consists of silver metal particles suspended in a gelatin layer. William Henry Fox Talbot introduced the basic chemical process in 1839, but the more complex gelatin silver process did not become the most common method of printing black-and-white photographs until the late 1910s. Because the silver image is suspended in a gelatin emulsion that rests on a pigment-coated paper, gelatin silver prints can be sharply defined and highly detailed in comparison to platinum or palladium prints, in which the image is absorbed directly into the fibers of the paper.

A gardinetto is an ornament in the form of a vase of flowers or a flower basket, especially suited for brooches but sometimes rings and pendants. The colorful items were created from a multicolored array of gemstones such as rubies, emeralds, and sapphires. Initially enjoying popularity circa 1740-1780 these colorful floral gemstone depictions were love tokens to be exchanged with lovers and friends. A resurgence in popularity occurred around 1920.

A girandole is an ornamental branched wall candleholder, sometimes incorporating a mirror. Girandoles came into use about the second half of the 17th century, and were commonly made and used in pairs.

From Clinton Howell Antiques: A pair of rococo carved girandoles one dating circa 1750, the other modern

Glyptography comes from the Greek word “glyptos” which means to carve. In jewelry, glyptography is the art of gemstone carving, and applies to both intaglios and cameos.

Gouache is a method of painting using opaque pigments ground in water and thickened with a gluelike substance. The main difference between gouache and watercolor is that gouache is more opaque than watercolor. Due to the transparency of watercolor, the light is able to travel through the pigment and reflect off of the white paper, giving it a luminous quality that differs from gouache’s matte finish.

Grisaille is a painting technique by which an image is executed entirely in shades of gray or in another neutral greyish color. It is particularly used in large decorative schemes in imitation of sculpture.

A guéridon is a small table supported by one or more columns, or sculptural human or mythological figures, often with a circular top. The guéridon originated in France towards the middle of the 17th century. The supports for early guéridons were often modeled on ancient Egyptian and Greek as well as various African human traditional figures. While often serving humble purposes, such as to hold a candlestick or vase, the guéridon could be a high-style decorative piece of court furniture. By the time of Louis XIV’s death in 1715, there were several hundred guéridons at Versailles.

An Italian empire ormolu guéridon, Rome, circa 1814-15. Image via Christie’s.

Guilloché is a decorative technique in which a very precise, intricate and repetitive pattern is mechanically engraved into an underlying material via engine turning, which uses a machine of the same name, also called a rose engine lathe. This mechanical technique improved on more time-consuming designs achieved by hand and allowed for greater delicacy, precision, and closeness of line, as well as greater speed.