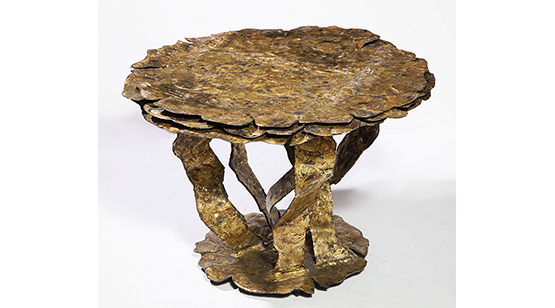 Bauhaus – which literally translates to “construction house” – is a school of design established in Weimar in 1919 by Walter Gropius, moved to Dessau in 1926, and closed in 1933 as a result of Nazi hostility. At the core of Bauhaus lies the idea of the “Gesamtkunstwerk”, a synthesis in which multiple art forms are unified through architecture. A building was not just an empty vessel for the Bauhaus school, it was one element of the total design, and everything inside added to the overall concept. Influenced by movements such as Modernism and De Stijl, and as a counter-movement to the Art Deco and Art Nouveau styles; Bauhaus artists favored linear and geometrical forms, while floral or curvilinear shapes were avoided. Only line, shape and color mattered. Anything else was unnecessary and needed to be reduced.

Belle Époque literally means “Beautiful Age” and is a name given in France to the period from roughly the end of the Franco-Prussian War (1871) to the start of World War I (1914). It was so named in retrospect, when it began to be considered a “Golden Age” in contrast to the horrors of World War I. The industrial output of France tripled during the Belle Époque, thanks to the continued effects and development of the industrial revolution. Mass entertainment was transformed by venues like the Moulin Rouge, home of the Can-Can, by new styles of performance in the theater, by shorter forms of music, and by the realism of modern writers. Print, long a powerful force, grew in even greater importance as technology brought prices down still further and education initiatives opened up literacy to ever wider numbers.

A bergère is an enclosed upholstered French armchair or fauteuil with an upholstered back and armrests on upholstered frames. Designed for lounging in comfort, a bergère in the eighteenth century was essentially a meuble courant, designed to be moved about to suit convenience, rather than being arranged permanently and formally along the walls as part of the decor.

The Biedermeier style in art was a transitional period between Neoclassicism and Romanticism, as it was interpreted by the bourgeoisie, particularly in Germany, Austria, northern Italy, and the Scandinavian countries. Biedermeier furniture derives essentially from the Empire and Directoire styles; with remarkable simplicity, sophistication, and functionality. Stylistically, Biedermeier furniture softened the rigidity of the Empire style and added weight to Directoire. Biedermeier pieces were executed in light, native woods and avoided the use of metal ornamentation. Surfaces were modulated with natural grains, knotholes, or ebonized accents for contrast.

The Bloomsbury Group – or Bloomsbury Set – was a group of associated English writers, intellectuals, philosophers and artists in the first half of the 20th century, including Duncan Grant and Vanessa Bell, Virginia Woolf, John Maynard Keynes, E. M. Forster and Lytton Strachey. They lived, worked or studied together near Bloomsbury, London and were united by an abiding belief in the importance of the arts and the rejection of bourgeois habits. A well-known quote about the Bloomsbury Group, attributed to Dorothy Parker, is “they lived in squares, painted in circles and loved in triangles”.

The studio at Charleston, the country home of Vanessa Bell and Duncan Grant.
Photo by Tony Tree/The Charleston Trust

A bouillotte is an 18th century table lamp with two or three adjustable candle brackets and a common shade that would slide down a central shaft and be secured by a screw to accommodate the dwindling length of the lit candles.

A briolette is an elongated pear-shaped gemstone cut with facets, and it is often drilled to hang as a bead. It was popular during the Victorian times. The Smithsonian has a 275-carat diamond briolette necklace presented by Napoleon Bonaparte in 1811 to his Empress consort Marie Louise (see below).

Brutalist architecture, or New Brutalism, is an architectural style which emerged during the 1950s in Great Britain, among the reconstruction projects of the post-war era. Brutalist buildings are characterized by their massive, monolithic and blocky appearance with a rigid geometric style and large-scale use of poured concrete. Brutalist furniture, lighting and wall sculptures often have hard edges, jagged shapes, rough surfaces, patinated finishes, asymmetrical organic designs, and metallic color palettes.

From Guy Regal: The “Sanctuary” Table by Silas Seandel

This type of furniture literally translates to “buffet with two bodies”. It’s often an ingenious combo of storage and display case. Since it could easily be split apart it was very easy to transport or travel with and deliver into homes through the typical narrow doorways of past centuries.

From epoca: a French provincial walnut buffet-a-deux-corps, circa 1750