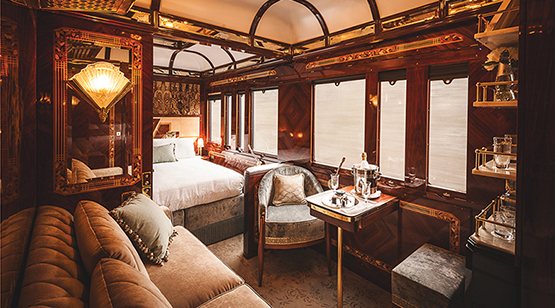 Nothing personifies luxury travel more than the legendary Orient Express. In 1865, a prominent Belgian banker’s son named Georges Nagelmackers first envisioned “a train that would span a continent, running on a continuous ribbon of metal for more than 1,500 miles.” During a trip to America, Nagelmackers witnessed the many innovations in railway travel there—chief among them George Pullman’s unprecedented, luxurious “sleeper cars”—and he returned determined to realize his vision. In 1883, after a number of false starts, Nagelmackers’s Compagnie Internationale des Wagons-Lits (wagons-lits is French for “sleeper cars”) established a route from Paris to Istanbul, then called Constantinople. The newspapers dubbed it the “Orient Express”—though Istanbul was as far toward the “Orient” as this train would ever travel and Nagelmackers embraced the name. On October 4, the Orient Express set out on its first formal journey, with many journalists aboard to publicly marvel at the train’s luxury and beauty. Aboard the train, the delighted passengers felt as though they’d entered one of Europe’s finest hotels; they marveled at the intricate wooden paneling, deluxe leather armchairs, silk sheets and wool blankets for the beds. The journey from Paris to Istanbul lasted a little over 80 hours.

The Orient Express soon became known as the King of Trains and Train of Kings. Leopold II of Belgium and Carol II of Romania were famed as on-board seducers. Tsar Nicholas II demanded custom-built carriages, while Ferdinand I of Bulgaria, scared of assassins, even insisted on driving the train through his own kingdom at breakneck speed.

Other famous passengers included Tolstoy, Trotsky, Diaghilev, Marlene Dietrich (below), Lawrence of Arabia and the spy Mata Hari – as well as fictional characters such as Hercule Poirot and James Bond.

In its heyday, the train earned another nickname: “Spies’ Express.” Continent-hopping secret agents loved the train, since it made their jobs so much easier and their travels much more comfortable. One of the most remarkable of these agents was an Englishman named Robert Baden-Powell, who posed as a lepidopterist collecting samples in the Balkans. His intricate sketches of the forms and colors of butterfly wings were actually coded representations of the fortifications he spotted along the Dalmatian Coast, which served as great aids to the British and Italian navies during World War I.

In later years, the pedigree of the famous train became rather complicated, as Nagelmackers’s original line spawned similar ones following slightly different routes, and as other providers began to use the phrase “Orient Express” for promotional purposes. The Direct Orient Express, the Venice Simplon Orient Express (below a current picture), the Nostalgic Orient Express and many others have existed over the years.

The original Orient Express made its last journey from Strasbourg to Vienna on December 12, 2009, but the Simplon Orient Express still exists. In fact, in a marriage made in luxury travel heaven, the Venice Simplon Orient Express was sold in 2018 to LVMH, the French luxury goods company that owns Christian Dior, Moët & Chandon champagne and …. Louis Vuitton, the storied French fashion house and luxury retail company founded in 1854 by Louis Vuitton and renowned for its high-end luxury trunks and leather travel goods, adorned with the signature LV monogram.

Below from Milord Antiques: 1920s Louis Vuitton cabin trunk with studded black metal trim and all inscribed L.V. with a surface fitted by wooden trusts. France.