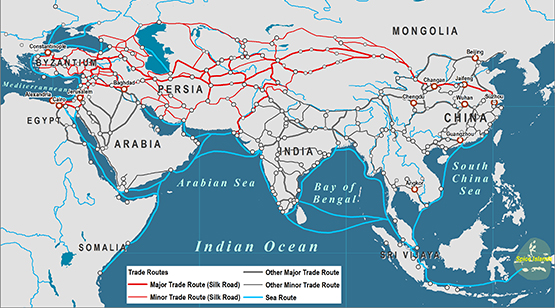 The legendary Silk Road was a network of trade routes connecting China and the Far East with the Middle East and Europe. Established when the Han Dynasty in China officially opened trade with the West in 130 B.C., the Silk Road routes remained in use until 1453 A.D., up until the Ottoman Empire boycotted trade with China and closed them. Although it’s been nearly 600 years since the Silk Road has been used for international trade, the routes had a lasting impact on commerce, culture and history that resonates even today.

Even though the name Silk Road originates from the popularity of Chinese silk among tradesmen in the Roman Empire and elsewhere in Europe, the material was not the only important export from the East to the West. Trade along this major economic belt also included fruits and vegetables, spices, livestock, grain, leather and hides, tools, religious objects, artwork, precious stones and metals and – perhaps more importantly – language, culture, religious beliefs, philosophy and science.

Below, from Rodrigo Rivero Lake: Pair of wooden dvārapālas from Kerala, South of India, 17th century. Dvārapālas are characteristic architectural elements of the Hindu and Buddhist culture. In sanskrit Dvāra means door and pāla means protective or guardian, they are responsible for not allowing the entrance of the impure to sacred places.

Venetian explorer Marco Polo famously used the Silk Road to travel from Italy to China, which was then under the control of the Mongolian Empire, where he arrived in 1275. Twenty plus years later, Marco Polo returned to Venice, again via the Silk Road routes. His journeys across the Silk Road became the basis for his book, The Travels of Marco Polo, which gave Europeans a better understanding of Asian culture and commerce. On his deathbed, he famously declared: “I did not tell half of what I saw, for I knew I would not be believed.”