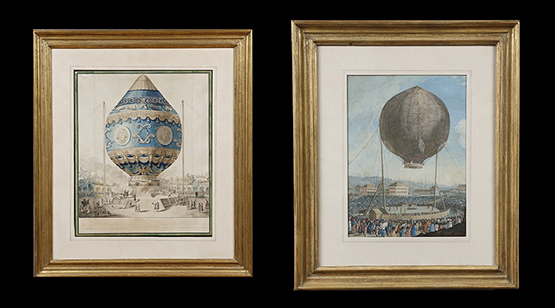 Of all the scientific discoveries and intellectual advances of the eighteenth century, none sparked more enthusiasm and excitement than the balloon. On the 19th of September 1783 scientist Pilâtre de Rozier launched the first hot air balloon called the Aerostat Reveillon. The passengers were a sheep, a duck and a rooster and the balloon stayed in the air for a grand total of 15 minutes before crashing back to the ground…

The brothers Montgolfier, Joseph-Michel and Jacques-Etienne were responsible for the first manned balloon flight. They came from a family of paper manufacturers and noticed that ash flows in the air when the paper is burned and laundry rises when it is placed above the fire. This inspired them to design and make a hot air balloon – the Montgolfière – that would carry people. Their first attempt took place on 21st November. The balloon was launched from the centre of Paris and flew for a period of 20 minutes. This moment is most often considered the birth of hot air ballooning.

Below from Carlton Hobs (left) Watercolor depicting the first aerial hot air balloon flight made by the Montgolfier brothers in the gardens of Foile Titon at the Réveillon wallpaper manufactory. French, circa 1784. Watercolor and pencil on paper. Attributed to Claude-Louis Desrais. (right) The ascent of the Montgolfier brothers’ balloon Les Flesselles on the 19th of nJanuary, 1784 in Lyon, France by Joseph Audibert. Gouache on paper.

On December 1, 1783, just ten days after the first hot air balloon ride, the first gas balloon was launched by physicists Jacques Alexander Charles and Nicholas Louis Robert. This flight too started in Paris, France. The flight lasted 2½ hours and covered a distance of 25 miles. The gas used in the balloon was hydrogen, a lighter than air gas that had been developed by an Englishman, Henry Cavendish in 1776, by using a combination of sulphuric acid and iron filings.

In the early days of ballooning, crossing the English Channel was considered the first step to long distance flying. In 1785 Pilâtre de Rozier and a man named Romain attempted to cross the channel in a balloon with an experimental system using both hydrogen and hot air compartments. Unfortunately this volatile mixture of highly flammable hydrogen with fire caused the balloon to explode thirty minutes after lift off and both men were killed. The first successful crossing of the English Channel was accomplished later the same year by French balloonist Jean-Pierre Blanchard and American John Jeffries using a gas balloon. Jean-Pierre Blanchard also undertook the first manned balloon flight in America. This flight ascended from a prison yard in Philadelphia, Pennsylvania. He ascended to about 5,800 feet and he made a successful landing in Gloucester County, in New Jersey. George Washington observed the launch.

Below from Carlton Hobbs: gilded ground faux engraving on glass of a balloon flight by Monsieur Blanchard at the coronation feast of their imperial majesties in 1804. Etched leaf on glass. French, circa 1804.

The fascination with ballooning swept across Europe and America and became the 18th century’s version of going viral. Balloonmania inspired hair and clothing styles. Craftsmen and merchants produced jewelry, hats, fans, snuff boxes, match and needle cases, dinnerware, wall paper, bird cages, chandeliers, clocks, furniture, and a host of other balloon-themed objects to attract the eyes of customers and open their pocketbooks.

Balloonmania continued to capture the imagination well into the 20th century. Case in point from Earle D. Vandekar: this 1950’s plate, designed by Piero Fornasetti and depicting the 1804 balloon flight on the occasion of Napoleon’s incoronation as Emperor of the French.